Audiobook Reviews March 2018 marks another month addicted to The Land. The series has even taken over my dreams. On at least two occasions I’ve dreamt of being a character in the Mist Village. Nerdy I know, but I can’t recommend the series enough if you’re a Sci-Fi / Fantasy fan. Only with great sadness and pure determination that I’ve been able to listen to other books in my audible library.


As a reminder, Please note that I’m been as vague as possible with my summaries to prevent any spoilers.


Audiobook Of The Month

How does he do it? Aleron Kong has managed to make skill grinding fun! I didn’t think it was possible, but that’s what makes his series so entertaining. You get addicted to Richter’s quest to grow stronger through leveling.

The Land: Swarm has Richter settling in to gain new skills, spells, and enchantments for The Mist Village. As Richter rises new structures and improves core buildings, he quickly discovers the benefits of having a well functioning town. Although the book mostly stayed within the confines of The Mist Village plenty of notable things happened to foreshadow things to come.

Get The Land: Swarm and get the rest of the series while you’re at it.

Buy it on Amazon: https://amzn.to/2GM3qVt

There were a couple decent audible sales in March, but I didn’t buy anything. The Land has used also used up all my audible credits.

In addition to The Land: Swarm, I listened to 3 other books in March. 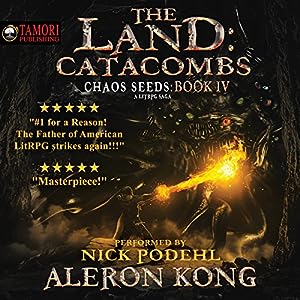 The fun continues in The Land: Catacombs, with Richter uncovering more places in and around his Village. The discoveries lead Richter and his group underground, where they battle epic monsters and magical creatures. Which in turn levels himself and the people around him.

Richters chemistry with the other characters, monster hunting, and discovery are the pillars of this book that everything revolves around. Leveraging everything from spelunking to city planning Aleron Kong keeps Richter busy with villager quests and hunts. New skills like war party and tame, make for some entertaining moments as well.

The book’s filled with funny banter and good humor. I can’t recall a book series that has got me laughing as much as The Land. Pick up The Land: Catacombs, just like the rest in the series.

Buy it on Amazon: https://amzn.to/2v1rrlJ 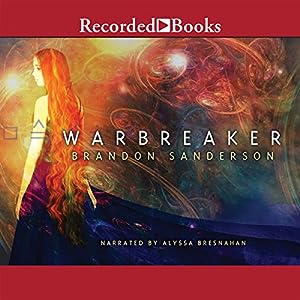 Warbreaker has been in my audiobook backlog for over a year now. While Warbreaker wasn’t my favorite book from Brandon Sanderson’s bibliography, it was solid.

Although, I’m still not sure who the main protagonist was. It wasn’t a problem. I just wasn’t sure who truly mattered. Every character had an interesting backstory and internal conflict. Lightsong and his story was a personal favorite of mine.

Overall, Warbreakers wasn’t addicting, but each branch of the story was meaty enough to be a standalone book. While the stories tended to play out on their own, they tied together very well in the end, leaving me with a positive attitude towards the book.

Buy it on Amazon: https://amzn.to/2IG9wDn 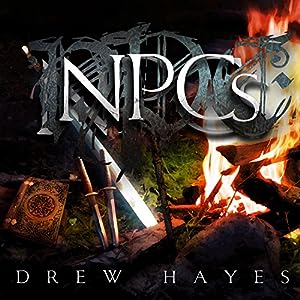 After the almost fanatic feelings I have towards The Land: Chaos Seeds, I tried NPC’s hoping it would give me the same sense of awe and wonder. Unfortunately, that’s not the case, and NPC’s fell a little flat.

The plot revolved around a reluctant group of nonplayable characters living inside a fictional dungeons and dragons game. Out of the blue, the group decided to accept a player quest and set out to become adventurers.

Their adventures lead them into battles where they gained rewards and reputation. But the enemies they encountered felt so meaningless you knew the results would be in their favor. The story culminated with a test that seemed to be their character-defining moment, but an unexpected solution soured my feelings towards the group.

In the end, I wasn’t sure if I wanted to continue in the series. The plot didn’t have any standout moments, and the narrator even sounded bored. But, to be fair, the discoveries the adventurers made at the end of the book looks to be launching them into a more entertaining storyline.

. I love the service. I used a similar trail when I first started listening, and now my audible library contains over 145 titles!

Kristoffer
Traveling, Capturing moments and Editing them down into tiny digestible videos. That's what I love to do with my downtime.
Previous post
Next post

I need a new book to listen to on a road trip. I think these might work for me and my husband, so thanks!

Thank you for your suggestions. I love using Audible too! I find it so hard to actually “read’ a book anymore fo listening to audio books is perfect during my commute to and from work.

I have been thinking about getting my boyfriend an Audible subscription, he is always listening to this kind of stuff! I will be sure to bring up your suggestions to him – thanks for the post.

Thanks for sharing this with him. Hope he finds it useful!

I am going on a trip in the next 10 days. I think your review is fonna come very handy. Thanks for sharing.

These would be great to listen to on an upcoming long drive I have coming up!

Do it! I can’t imagine my commute without audiobooks. They really make the time fly.

I need to checkout some audio books. I used to think they were for commutes but i can totally listen while working!

They really help. I’ll happily mow a lawn or finish tasks around the house listening to audiobooks 🙂